(The Conversation) — The word seance conjures up images of dark rooms, enraptured mediums, strange happenings, and spiritual voices. For many contemporary audiences, these visions may seem like something from the past, or perhaps a movie, rather than a living belief system.

For the past 20 years, American photographer Shannon Taggart has explored modern spiritualism, a religion whose followers believe in communicating with the dead.

His photographic series “Séance”, which was recently presented at the Albin O. Kuhn Gallery at the University of Maryland in Baltimore County, opens a window on this often misunderstood religion.

As a curator and art historian who has researched apparition photographs and conspiracy theory art, I was drawn to Taggart’s images because they offer a lens through which examine the role of spirituality in modern life.

At a time defined by a global pandemic, heightened political division, and the planetary threat of climate change, I wonder: Is spiritualism due for a major resurgence?

Spiritualism is knocking at the door

Spiritualism emerged near Rochester, New York, in 1848 when two sisters, Kate and Margaret Fox, claimed to have heard a mysterious knock on their bedroom wall. The teenagers claimed to communicate through a knock system with the spirit of a man who had died in the house years earlier. News of the phenomenon traveled fast and the girls appeared in front of crowds demonstrating their alleged abilities.

Soon reports of similar phenomena occurring across the United States appeared in the press, and the possibility of speaking with the deceased fueled the popular imagination.

Spiritualism first developed in the private sector. People who channeled communication with the dead, called mediums, operated from their homes, where they held seance circles, gatherings in which a small group attempted to make contact with the spirit world.

Over time, Spiritualists began to appear publicly at conventions and outdoor summer camp meetings. In the 1870s they began to put down roots, founding like-minded communities and centers of study, such as the Spiritist Colony of Lily Dale, New York, established in 1879.

In addition to holding seances, spiritualists practice healings and believe in the gift of prophecy. Mediums say they carry messages from the dead to the living, including reports of the future.

Many Spiritualists hoped to make utopian visions of the future a reality in the present by supporting progressive political causes such as abolitionism, women’s rights, and Indigenous rights.

Notably, spiritualism gave women an unprecedented role in religion, providing an audience and a platform to deliver both personal and political messages. Suffragettes Marion H. Skidmore, Elizabeth Cady Stanton and Susan B. Anthony all spoke to Lily Dale. The views of the Spiritualists thus represented a radical break with traditional religious and political authority.

ghosts in the machine

The Fox sisters’ alleged ability to communicate with the dead became known as the “spirit telegraph”, referring to the then recent invention of Samuel B. Morse. As spiritualism developed, adherents embraced technology as tools for spiritual communication and to prove the existence of spirits.

Photography becomes “the perfect medium” to create an iconography of spiritualism. Whether through astronomical, microscopic or X-ray photography, cameras could make the invisible visible. Despite the proliferation of altered photographs in the 19th century, the status of photography as a truthful representation of reality has remained – and, one might say, continues to remain – largely intact.

Photography also played a prominent role in 19th century memory culture, since the camera could freeze time and make absent loved ones present, if only as a visual trace.

The American Civil War brought death on an unprecedented scale to people’s living rooms through the pages of the illustrated press. Black clothing, mourning jewelry and the post-mortem photography genre were commonplace in a culture of mourning.

Family spirit photographs of Sandy Candy Eppinger, which show her brother Eugene Candy with the spirits of their grandmother Ethel Philips and great-aunt Helen Thompson, in Lily Dale, New York, in 2015.
© Shannon Taggart. Courtesy of the artist, Author provided

In the 1860s, New York portrait photographer William Mumler and his wife, Hannah Mumler, a medium, offered portrait sessions in which the spirits of the sitters’ loved ones seemed to manifest in the resulting photographs.

Mumler’s dramatic portraits also raised the specter of peddling. The photographer was charged with fraud by plaintiffs who argued he faked the photographs, and none other than showman PT Barnum testified for the prosecution.

The double-sided coin of belief and skepticism haunts these historical examples; nevertheless, the psychological impact of these images among mourners remained powerful.

History seems to suggest that a catastrophic loss of life can stimulate a renewed interest in spiritualist beliefs.

It is perhaps no coincidence that portraits of the Mumlers came into fashion amid the devastation of the American Civil War, while Deane’s popularity peaked in the aftermath of World War I and the flu pandemic.

Has the widespread sense of uncertainty induced by the COVID-19 pandemic sparked another spiritualist revival?

Alternative belief structures, including astrology and tarot, seem to have experienced a resurgence, reaching new audiences via the internet and social media. 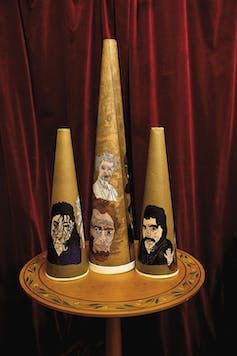 Recently, a number of psychics have become famous through endorsements by a celebrity clientele. Some psychics claim to be able to channel stars from the grave, from Louis Armstrong to Elvis Presley.

While modern media has its detractors, its enthusiastic embrace of television and the Internet is a logical step for a religion that has always embraced new technologies.

What was once considered a niche subculture or the domain of late-night 1-900 call shows has become mainstream: psychic businesses were a US$2 billion industry in 2018.

This new spirituality influenced pop culture as well as high art; The 2019 Guggenheim Retrospective of Swedish artist and mystic Hilma af Klint was the most visited exhibition in the museum’s history, drawing more than 600,000 viewers.

New York Times art critic Roberta Smith argued that the impact of the exhibition amounted to a “psychic and historical shift” in the art world. Smith’s use of the word “psychic” is relevant; the exhibition was a turning point not only to restore the primacy of the role of women in the development of abstract painting, but also to refocus the spiritual in art.

Taggart’s photographs, on the other hand, explore the current practices, sites and objects of spiritualism.

Letting chance and automation guide photographic experiences, she reveals processes of transformation and altered states through blurring effects, halos of light and doubling of images that reference historic spirit photographs. . 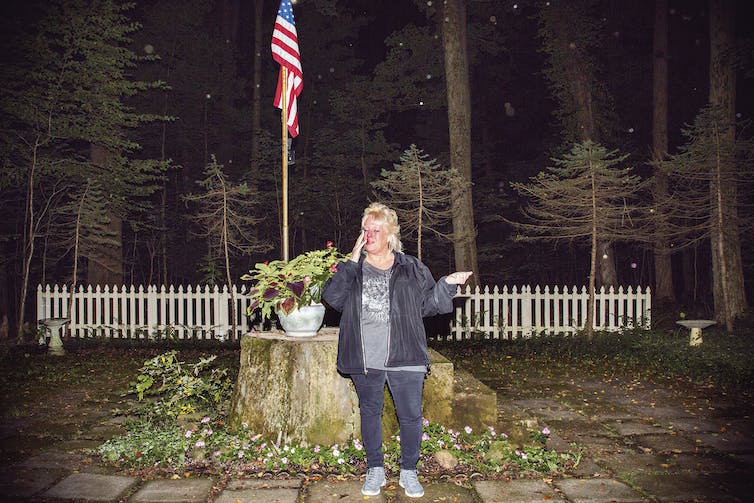 Kim Kitchen calls her late daughter Casey and asks her for orbs in Lily Dale, New York, in 2014.
© Shannon Taggart. Courtesy of the artist, Author provided

For Taggart, this question is largely irrelevant. Its aim is to remain faithful to the psychological experience of spiritualism, to make visible that which is ineffable.

Taggart’s photographs reclaim the marginalized history of Spiritualism at a time when the religion once again feels on the verge of a resurgence.

As Taggart likes to say, “You don’t have to take spiritualism at face value to take it seriously.”

(Beth Saunders is curator and head of special collections and gallery at the University of Maryland, Baltimore County. The views expressed in this commentary do not necessarily reflect those of Religion News Service.)